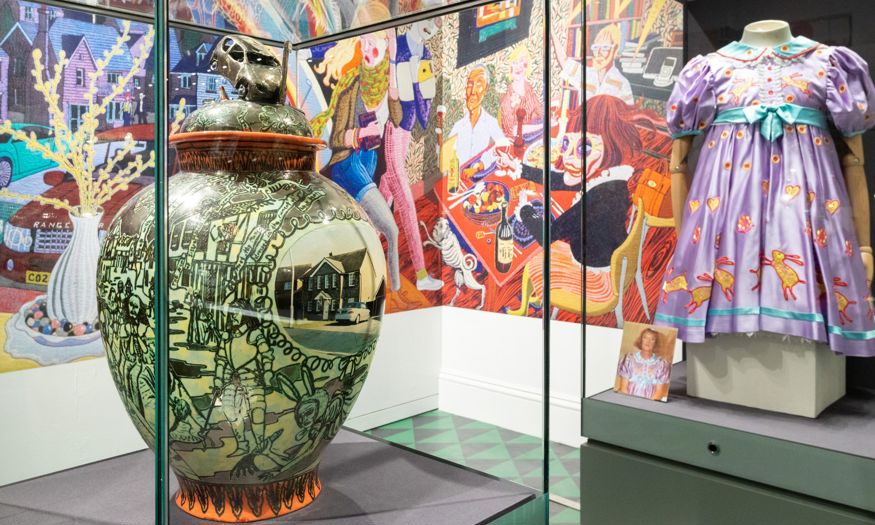 We are giving visitors the chance to see two works by Grayson Perry with a special connection to the county. ‘Mad Kid’s Bedroom Wall Pot’ and a ‘Julie Tile’ have been loaned to the museum over the coming months, and together they give a fascinating insight into the development of the Turner Prize winner’s style.

‘Mad Kid’s Bedroom Wall Pot’ was created by Grayson Perry in 1996. The classically-shaped pot takes the viewer into the bedroom of an unhappy teenager, featuring a poem by the artist which ends with the lines ‘I was a mad kid and now I ain’t. I got out ‘coz I could paint’. The techniques used, including intricate glazing, photo-transfer and designs marked into the clay are typical of his work from this period.

The ‘Julie Tile’ was made almost 20 years later and is one of the pieces created for ‘A House for Essex’, one of Grayson Perry’s most ambitious projects to date. The holiday house in Wrabness is a shrine to Julie Cope, a fictional Essex every-woman, telling the story of her life through its decoration. The tile is one of hundreds made to adorn this extraordinary building overlooking the Stour estuary, designed in collaboration with FAT Architecture.

Councillor Marie Goldman, Deputy Leader of Chelmsford City Council says residents have a unique opportunity to see these works by one of Britain’s most-loved artists: “Our local museum is here to bring visitors the very best of our city’s heritage and its collections and exhibitions are completely free. Grayson Perry’s work is in demand around the world - don’t miss out on the chance to see pieces of such relevance to Chelmsford.”

The two pieces will be displayed in the ceramics gallery along with ‘The Chelmsford Sissies’, a pot which tells the fictional story of English Civil War soldiers forced to parade through the streets of the city dressed as women.

Chief curator Dr Mark Curteis says Chelmsford Museum is keen to feature Perry’s work whenever there’s an opportunity to do so: “We know how lucky we are having a true star of the art world and such a brilliant social commentator growing up in the city. When our new galleries were unveiled last summer, visitors had the chance to see the iconic dress Grayson wore when he won the Turner Prize. New loans of these key pieces will now take its place, giving residents a fresh understanding of his work.”

The ‘Julie Tile’ has been loaned to Chelmsford Museum by the Victoria Miro Gallery until the summer and ‘Mad Kid’s Bedroom Wall Pot’ is on loan from the Crafts Council until the end of the year.